About
Projects
Essays
Why illustration theory?
the institutional benefits of embedding theory into illustration practice and curriculums 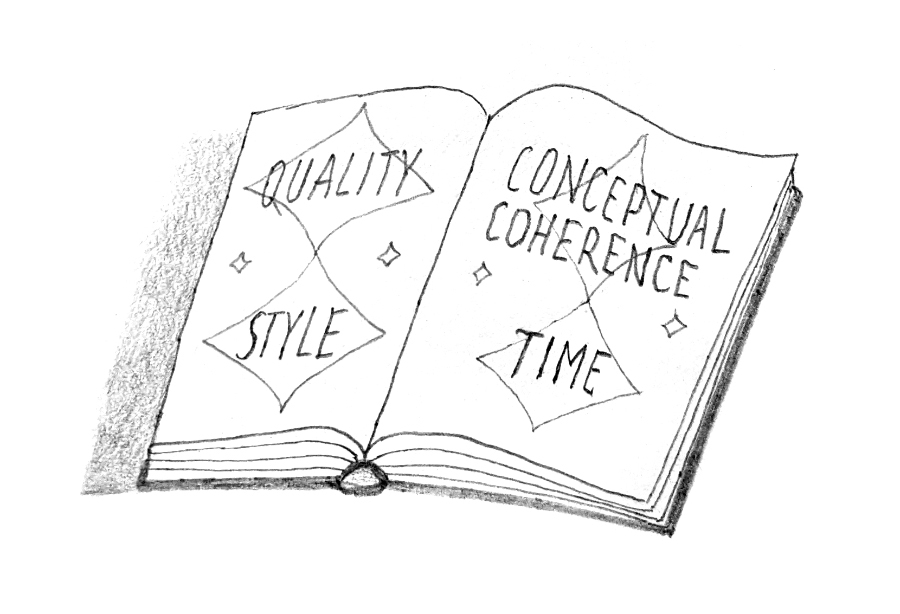 One of the most common starting points for discussion among illustrators is the low status of the profession. In addition to low wages, illustrators recall the lack of social guarantees, insufficient understanding of the legal side of the business, the absence of transparent financial strategies and established ways of formalising labour relations. It is more or less clear how working on financial and legal literacy can make a change in this situation. But assuming that theory and illustration studies can increase the budgets in the industry is often regarded as, to say the least, dubious. So what speaks in favour of this idea, why do illustrators need research and public reflection, and why would illustrators wade through the ‘theory jungle’?
When asked about the reasons for the unfortunate state of affairs in the profession, illustrators themselves, in addition to the low level of legal and financial literacy among themselves, often recall how illustration is seen as ‘not serious enough’ by the general public. Nevertheless, the origins of this attitude are rarely analysed and are usually perceived as a distressing default status. Meanwhile, illustration studies pay a lot of attention to the analysis of this marginalised position of illustration, noting that the history of neglect towards the discipline goes far back into the past. As for the European context, a number of sources begin this conversation with the events of the 18th and 19th centuries in England and France, when writers and poets began to actively discuss and condemn the illustration as something that oversimplifies the text, reduces it to the particularities of a single image, and generally ‘vulgarises’ the text (In: Hyde E., A Way of Seeing: Modernism, Illustration, and Postcolonial Literature. // ProQuest LLC, 2013)

For instance, Flaubert wrote in 1862, ‘Never, as long as I live, shall I allow anyone to illustrate me, because: the most beautiful literary description is eaten up by the most wretched drawing’. (In: Doyle S., Grove J., Sherman W. (eds.) History of Illustration // London and New York: Fairchild Books/Bloomsbury Publishing, 2019)

John Murray, who was a Quarterly Review editor in 1844, was outraged by visual aids once included to support the text ‘now bid to supersede much of descriptive writing’, and frustrated by texts being subordinate to the ‘so-called illustrations’ of it A writer Charles Lamb argued that he has a prejudice against illustration and a feeling that the ‘female arts’ should not intersect with the ‘male art’ of writing. (In: Kane, B., Adapting the Graphic Novel Format for Undergraduate Level Textbooks. // Ohio State University, 2013 [Online])

Analysing these situations, a contemporary author, Brian M. Kane, notes that in the XIX century text and image came to a hierarchical relationship in which ‘The “superior” verbal arts were considered masculine, powerful, intelligent; while the pictorial arts, referred to as lesser arts, were aligned with the feminine attributes of “imitation, sympathy, charm, grace, and beauty” (Kooistra, 1995)’

At the same time, of course, the hierarchy between the word and the image does not in itself explain the marginalised status of the illustration. Rather, it is important to consider it as a setting, an environment in which illustration exists. Other factors also influence what illustrators themselves see as marginalisation (low wages, the lack of well-established ways of regulating labour relations, etc). Among them is the lack of institutional support for illustrators. This is not about state support and not a claim that there should be someone who provides grants, premises and other resources to illustrators. Rather, it is about the individualised state of the profession. Unlike graphic design or the game market, with their huge teams, a chain of suppliers and partners, the financial risks of many people and, as a consequence, a clear marketing strategy and financial policy, the profession of an illustrator largely ends with the illustrator herself. Unlike IT freelancers, illustrators do not have a prolific market, where prices and demand is shaped by giant corporations. The illustration does not and cannot have its own Google, Microsoft and Facebook.

The publishing business, with which illustration is most often associated, is generally recognized by illustrators as one of the least profitable sources of illustration income. The situation is better in advertising, but advertising is not exclusively an illustrative domain. Moreover, the fact that there is just one person behind the creation of the final illustration, and not a team that pays - apart from salaries — for office rent, bookkeeping, and deals with higher taxes) prevents illustration prices from being high.

However, it is not only the big business behind individual authors that can be the basis of the financial credibility of the profession. For example, in contemporary art, institutions that support individual authors are not only auctions, collectors, galleries, museums and art dealers, but also a huge layer of practices related to the study of art: art criticism, curating, art history. Contemporary art is often the focus of attention of researchers from cultural studies, sociology, philosophy, and political science. Such research, of course, does not directly bring money to the artists (and often even to the researchers), but indirectly it indicates the status of the profession and reproduces it with every next paper.

Perhaps the only major market that feeds the field of illustration in any meaningful way is the education market. There are a lot of various courses offering to master graphics and illustration, and tutors are almost always practising illustrators. But in addition to generating economic support, the education market allows to gradually accumulate a critical amount of knowledge and reflection, which occasionally results in the appearance of some kind of a book that illustrators are buying up overnight. Illustration is gradually getting included into the symposia programmes (which, however, are more often attended by teachers and their students, rather than practising illustrators). This knowledge has not yet been transferred to illustration curricula, but this seems to be a matter of time and conscious effort.

Of course, one can argue that the lack of research is a result of illustration largely staying outside of hot public debate: it is not expected to problematize contemporary reality as sharply as, say, contemporary art does. But the counter-argument would be: why is it not studied as part of everyday life then? If we accuse some part of illustration of conformism and turn a blind eye to its more uncompromising manifestations, then one could say that it is precisely because of its “conformity” that this part deserves attention as reflecting actual reality. For example, Michelle Bogart, in her article “Making meaning of illustration” (Bogart, M., Making meaning of illustration // Norman Rockwell Museum, 2018 [Online]), proposes to consider illustration as a product of negotiations and compromises between many parties: not only illustrators, but also art directors, clients, publishers, distributors and many others. Accordingly, the criteria that are relevant to contemporary art are not applicable to the illustration.

One could assume that a systematic study of illustration requires a certain level of standardisation of images: ​​for example, emoji or stickers in instant messengers are highly standardised, in contrast to unique illustrations created as part of individual practice. But there are also aspects of this uniqueness that are now universally significant: for example, the issues of protecting uniqueness in the digital space increasingly reflect the legal system failures in the digital environment. Seeing authorial illustration practice in this context could have led to a larger debate about our visions of uniqueness, authorship, replication, — but, sadly, it does not.

There are things to study in illustration, and illustration as a field would definitely benefit from illustrators getting slightly more engaged with illustration studies. But currently the majority of illustrators, immersed in pressing work issues, rarely engage in public critical reflection in the field. Moreover, critical studies and theory are often seen by the illustrators themselves as lacking connection to everyday life reality of the studio work, and therefore unnecessary. This is evident both in the way curricula are shaped and in how the students feel about theoretical disciplines, if they exist in the curriculum at all. When you say "theory in illustration", students tend to imagine "colour theory" or "composition theory". The fact that the inclusion of illustration into the scope of academic inquiry forms the institutional environment which affects the status of the profession, is often considered a dubious hypothesis, while the idea that the presence of illustration research affects the amount of money that illustrators earn, is ridiculed as narrow-minded pragmatism or a far-fetched fantasy.

That is why in different countries there are initiatives that popularise illustration studies - primarily among illustration students. For example, Intellect publishes the Journal of Illustration, with editors and authors teaching in the UK (and not only) art universities. The recent ‘Illustration research methods’ from Bloomsbury, was written by professors at Kingston University. The 2018 ‘History of Illustration’ published in the United States, was edited by professors from a number of art universities in the US. The Norman Rockwell Museum hosts all sorts of lectures, conferences and supports research initiatives, with essays on illustration published on their website. In France, there is an academic illustration research team called Illustr4tio.

It is difficult to imagine circumstances in which illustration as a whole (and not just certain areas, such as political caricature or comics) will suddenly attract the attention of researchers from other fields — unless there is effort from illustrators themselves. That is why it is so important that engaging with an articulate critique in illustration becomes an integral part of illustrators’ professional routine — just as drawing, finding clients or planning a budget.